Situated in the heart of Duisburg, the Lehmbruck Museum is a museum for sculpture. Its collection of modern sculpture by artists such as Alberto Giacometti, Constantin Brâncuși, Hans Arp and of course Wilhelm Lehmbruck is quite unique in Europe. The museum is housed in an impressive ensemble of buildings set amidst the sculpture park, which invites visitors to wander around and discover its art for themselves.

The institution is named after sculptor Wilhelm Lehmbruck, born in 1881 in Meiderich, which is now a district of Duisburg. Alongside Ernst Barlach, Lehmbruck is widely regarded as the most important German sculptor of Classical Modernism. His work had a lasting influence on subsequent generations of artists and has continued to be at the forefront of interest after his suicide at a comparatively young age in 1919.

Changing exhibitions of sculptures in a fascinating architectural setting

Lehmbruck’s second son, the architect Manfred Lehmbruck, designed the museum building. It is nowadays considered one of the most interesting and beautiful museum buildings of the post-War period and offers ample space for the presentation of Lehmbruck’s impressive sculptures and those of other artists as part of the permanent and temporary exhibitions. The focus in all of this lies on select key pieces from the estate of Wilhelm Lehmbruck, which are continually placed in new contexts and juxtaposed to art works from different eras. The museum draws a line from Primitivism and Cubism via abstract art and Expressionism to Constructivism and Minimalism. In doing so, it illustrates the parallels and differences between the different trends and art historical developments in such a way that they are not just exciting for art connoisseurs but also are readily comprehensible for interested laypersons. Furthermore, the sculpture museum also supports contemporary local and regional artists and presents their works in its rooms. 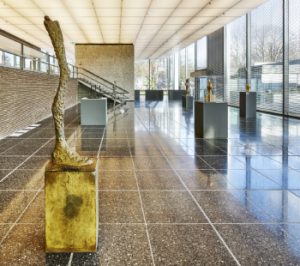 Lehmbruck Museum also possesses Germany’s most important group of works by Alberto Giacometti, comprising the pieces “Woman on the Wagon”, “The Forest” and “The Leg”. Thanks to donations and permanent loans as well as the dedicated work of the Friends of the Museum the collection is regularly being expanded.

It is this mixture that makes the institution an exceptional place for communication between art and people, taking you on a journey through the history of Modern sculpture, from the greatest sculptors of the 20th century up until our present day.

Art for everybody: A museum conquers the city

There’s a great deal to discover here, and not just inside the museum but around the building, too. The museum is surrounded by the lush greenery of Kantpark, which spans about seven hectares and has down through the decades morphed into a sculpture park where citizens and, visitors (to the museum and the city) alike can experience art up close and free of charge. With over 40 monumental sculptures by important artists such as Magdalena Abakanowicz, Tony Cragg, Henry Moore or Meret Oppenheim the park offers marvellous variety.

This link between inside and outside is an expression of the Lehmbruck Museum’s motto “Art is there for everybody”. In line with this maxim, the museum’s commitment to art in the public space does not end on its own doorstep. For example, the support of Lehmbruck Museum has enabled numerous public art projects to take off in many locations across Duisburg – visitors to the city come across them in underground stations, when shopping on Königsstrasse, visiting the inner harbour, and even in the forest cemetery, to name just some of the venues. And at the confluence of the Ruhr and Rhine rivers the 25-metre-high stele “Rheinorange” by Lutz Fritsch towers as up a landmark.

Museum education at Lehmbruck Museum: art communication for everybody

The museum remains true to its motto of “art is there for everybody” in its art education work, too. The great variety of different series of events is geared towards a broad public, encouraging people to enter into dialogue and making everyone feel at home with the topic of art.

For over two decades Lehmbruck Museum has offered special programs for groups, families and school classes, as well as persons with special needs such as hearing or visually impaired people, or persons with dementia.

Your ticket for the: Museum