The Canadian artist couple Janet Cardiff and George Bures Miller have shaped an entire genre with their sound sculptures and installations. Their sound spaces are borne by the power and magic of sound, voices, music and noises that transport us into imaginary worlds. They create a whole new reality in which we must constantly reassure ourselves of our own perception. All our senses are challenged, but most of all our sense of hearing: Cardiff and Miller design works which activate our extreme attention and heighten our awareness in order to open ourselves to the unexpected. The interplay of interiors and spaces evokes both our individual and collective memories. 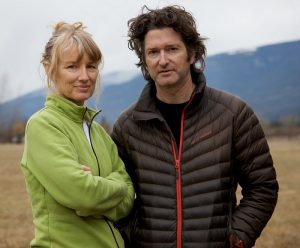 Janet Cardiff (*1957) and George Bures Miller (*1960) have been working together since the 1990s. They became internationally known with their multimedia works in which the boundaries between sound art, audioplay, concert, cinema and theatre are blurred. Few artists have approached spaces and places with such imaginative power as Janet Cardiff and George Bures Miller. Their body of work takes up important developments in 20th century sculpture and opens up new perspectives for 21st century sculpture by expanding our concept of sculpture into the world of sounds. They create a new quality of sound as a sculptural material – the immateriality of sound becomes tangible and thus acquires a material presence in which the concept of sculpture is redefined.

Visitors of documenta 13 in Kassel in 2012 will remember their haunting sound installation Forest (for a thousand years...), which could be experienced in a forest clearing. Cardiff and Miller had solo exhibitions at the 21st Century Museum of Contemporary Art, Kanazawa, Japan (2017/18), the Tate Modern’s Switch House, London, England (2017), the San Francisco Museum of Modern Art, USA (2015/16), the Haus der Kunst, Munich (2012), and the Hamburger Bahnhof, Berlin (2009), among others.

On 12 February 2020, an international jury chaired by Rein Wolfs awarded the Wilhelm Lehmbruck Prize of the City of Duisburg and the Landschaftsverband Rheinland to the Canadian artist couple Janet Cardiff and George Bures Miller. The jury honoured Janet Cardiff and George Bures Miller for their sound spaces and captivating stories which have inscribed themselves into the collective memory of an international audience since documenta 13 (2012). “What convinced us above all,” the jury stated, “was that Cardiff and Miller do not work exclusively for the museum but with their suggestive audio walks expand their artistic practice into urban public spaces, thus penetrating boundaries and barriers.” 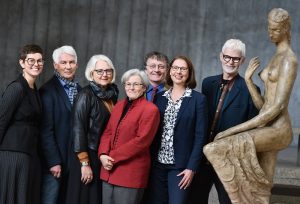 The Wilhelm Lehmbruck Museum Foundation, the City of Duisburg and the Landschaftsverband Rheinland thank the Friends of the Wilhelm Lehmbruck Museum, Dr. Otmar Franz, Mr. Paul Köser, Mrs. Ursula Göbel and Dr. Reimund Göbel as well as all supporters who wish to remain unnamed for the unceasing and passionate support with which they have promoted the renewal of the Prize.

Find out more about the Wilhelm Lehmbruck Prize

Photo in header: Janet Cardiff and George Bures Miller, Forest (for a thousand years...), 2012, installation view at documenta 13 in Kassel

Your ticket for: Wilhelm Lehmbruck Prize 2020